When I visited Hockessin, DE two years ago, the site of the first Catholic Church in Delaware caught my eye as I drove on Lancaster Pike Road. It looked like a pile of rubbish. Old rubbish is so photogenic, so I knew I had to come back before I left town to do a photographic study of it.

However, Pastor Steve Trader from Trinity Community Church saw potential in it that most of us would have overlooked. Today, as you will see, the dreams are coming to life.

According to one source, in 1772, the Catholic base in the area purchased the 16.5 acres at the order of Father John Lewis, a Jesuit missionary familiar with the area from his mission travels.

According to Deleware Online, the first log chapel on the site was built 12 years later beside a hilltop cemetery that remains there today. Probably only the cemetery remains today, but here are two decrepit buildings that stood on or near the property two years ago.

A mystery writer might use this setting for a scene for a murder, a buried treasure, or some ghostly tale. What would you write about this picture? 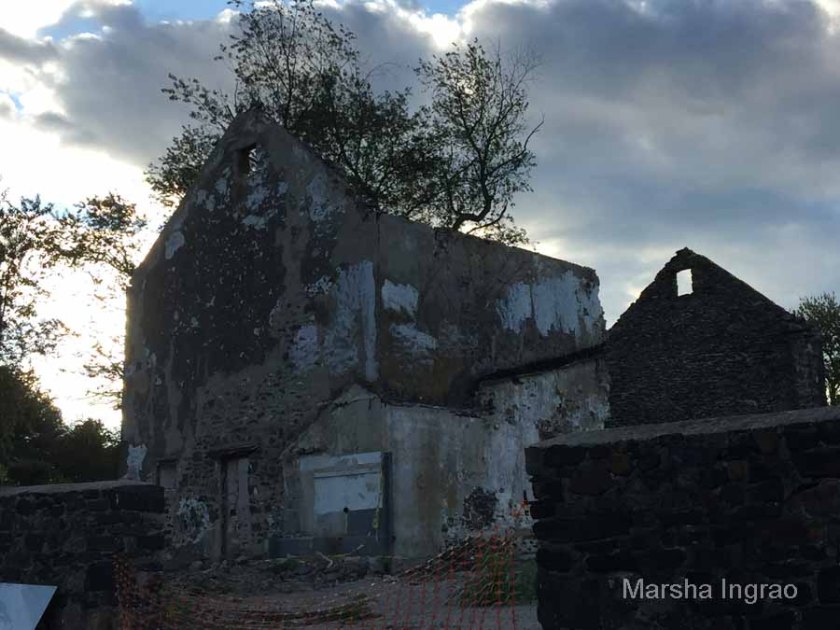 For a time, the property housed the only Catholic church within some 100 miles, according to Joe Lake, president of the Hockessin Historical Society. That would have been a trek for people without modern transportation. Local historians doubted if they attended church weekly.

One sign on the property called these piles of crumbling rubbish the “old barn.” The two signs also confused me because I don’t think of barns and churches pairing up in the same building.

Since childhood, I have loved old barns. My grandfather used large machinery and worked out of their garage. It became the family joke that on every trip through rural Indiana, we played the game, “A New Shop for Grandpa.” It kept my brother and me busy and peaceful pointing out the most decayed buildings we could find along the two-lane highways.

Our family particularly loved the advertising painted on the sides like Eat at Joe’s Get Gas, or Dr. Pierce’s Pleasant Pellets.  This stone barn resembled none of those.

Using my best investigative skills, I noted the candy wrappers and fast food containers on the dirt floor. My weak imagination conjured up pictures of kids playing castle in the pile of rocks. Barnyard animals keeping warm when ten inches of snow pressed against wooden doors and church services were the furthest images from my mind.

I wondered how anyone could save this pile of rubbish, but the sign said that it was being reconstructed. At the time, I saw no signs of any construction activity except for the yellow caution tape around the entire project. The tape was no more sturdy than the crumbling walls.  Camera in hand, I plowed through the mud and darkening skies, like a reporter onto a big story for the evening news.

The windows and doorways looked beyond repair.

‘This would not be the safest place to stand during an earthquake,” I reported to my imaginary audience.

It was 4:30, the start of the golden hours for photographers. The cold April wind bent the trees making them groan as I pulled up my hood and picked my way cautiously across the boggy ground to check out the reconstruction site I had loved two years before.

Shadows of large nearby trees spilled across the cemetery and beckoned me to explore the reconstructed building. How could I resist? 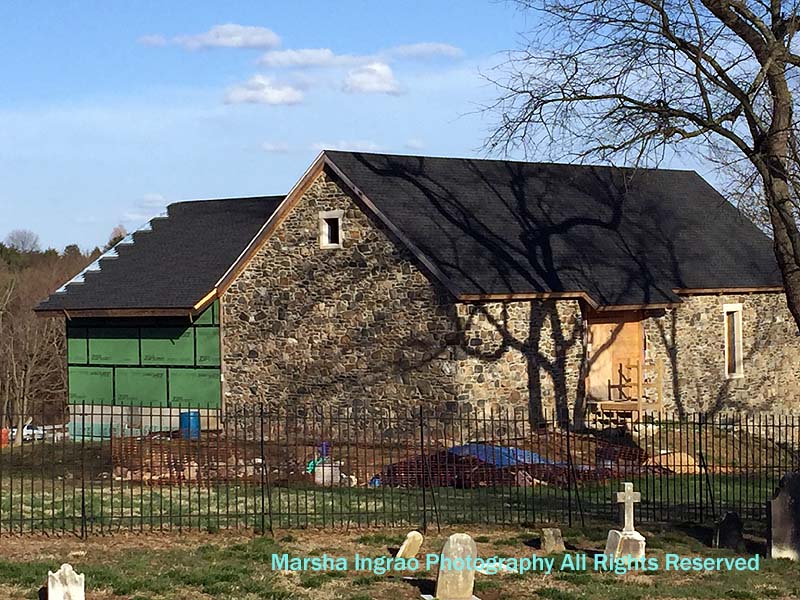 The Mystery of the Barn Solved

With my limited imagination, I wondered who would turn a church into a barn? It seemed sacrilegious.

It turned out that the Mundy’s purchased the property from the Diocese as farmland in 1912. The Mundy’s maintained the old barn property as a dairy farm until the 1960s. Bill Mundy kept it as a cattle farm into the 1990s. Locals at that time called the property Mundy’s farm. I don’t know what they called it on Tuesday-Sunday.

Between the 1990s and 2010 property managers neglected the property. In 2010 it was burned and vandalized by teens.

In 2018 with a sturdy composition roof and completed walls, this edifice looked like it would withstand the winds and the rains. Trinity Community Church, an interdenominational Christian church that holds its roots in the Assemblies of God, plans a multi-use complex on this 16.5-acre parcel.

The windows and doorways have been shorn up. They look very tiny now compared to the more expansive stone walls.

The recycle police would be proud to see the pile of stones that the builders have used to create the new building. The ongoing pile of rubbish still looks like a daunting work to me. But my only tool is an iPhone. Bancroft Construction Company has a few more resources and talent from which to draw. 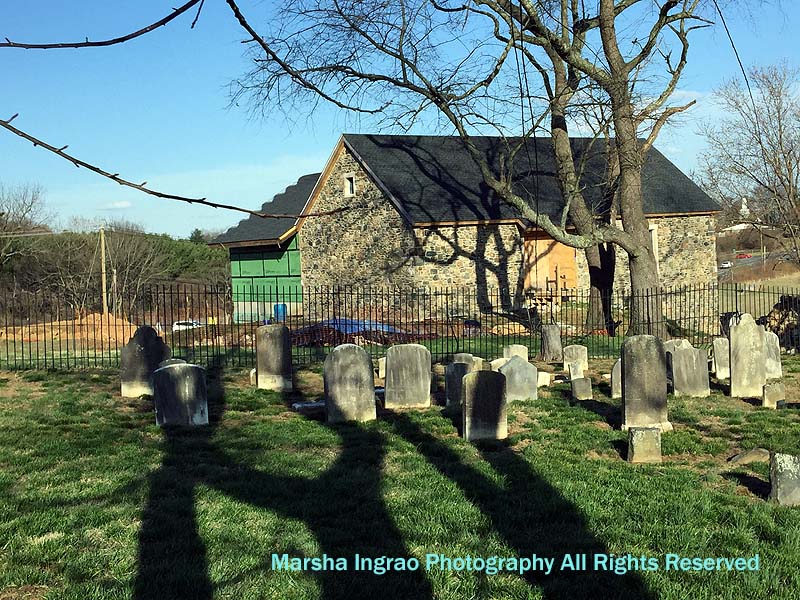 As the afternoon shadows deepened, the headless shadows seemed to raise their arms and praise the Lord. Upside down they looked like headless dancers. Either way, the bid me farewell from the 1880s burial place of locals and Irish immigrants killed in nearby powder mill explosions.

The Diocese of Wilmington still owns the resting place for the heroes of the past. But the future looks lively for the Old St. Mary’s Church, Mundy’s Farm and new Trinity Community Church in Hockessin, Delaware.