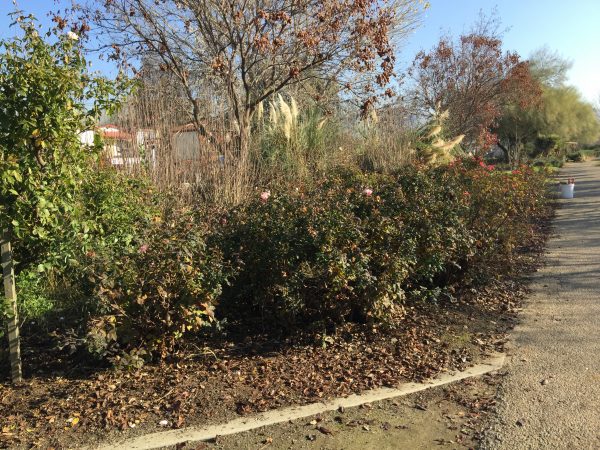 What are you doing with your business, church group, or your non-profit group? Have you considered gardening in a public garden?

The City of Woodlake has way more work than they can handle caring for the fourteen acres that is Woodlake Botanical Gardens. The founders, Manuel and Olga Jimenez and their non-profit, Woodlake Pride Coalition, manage all but the three acres designated as Woodlake Rose Garden. That Garden is divided into small sections and several groups have reached out to support it.

This little neglected area is about a third of the way along the Garden path. I probably should have counted the number of roses before I volunteered to adopt it, but I’m impetuous. With some community help, I think it’s doable.

There are probably about fifty roses on the property, several pomegranate trees and about 20 Rose of Sharon bushes and several clumps of overgrown Pampas grass. The tree front and center is a mystery to me.

What prompted me to adopt the garden is that it’s time to prune roses in CA. This is as cold as it gets, and you can still see roses in bloom on the bushes.

The Master Gardeners lead the way with their work in the Floribundas. Last year they held a training workshop at the Garden, and we have another one scheduled on January 25 from 11:00 – 2:00. It’s a great opportunity to learn how to make your roses gorgeous.

The pruned roses looked so good I blurted out that I thought I could take care of one section. After I announced my decision on the internet, I told Mr. Write, AKA Vince, about my project.

“There’s an adorable cove that I did not even know existed in my new section. I bet you could create something really beautiful there.”

Vince loved it and quickly came up with several ideas of what he might do with it. Meanwhile, I got started turning my new section into a Master Gardener amateur masterpiece.

I advertised on Facebook for community members to help the day before, but that was pretty short notice. However, the Garden has its own regulars.

The first person I saw was Jose. He offered to help so I gave him the loppers. He can’t see well, but that didn’t stop him. He chopped the roses down to a manageable level. Then I dug them out a little farther. Leaves, old branch trimming, and cockroaches filled the center of the plant, so I cleaned them out with a trowel as I clipped the smaller branches.

One garden regular said, “Put your hair up in a ponytail, then it won’t get in your face.” Duh! Good advice – dress for success.

My friend Sally raked the unwieldy branches into piles so they wouldn’t trip walkers after she finished working in other parts of the garden.

Instead of the three or four rose bushes I might have been able to prune on my own, we pruned fourteen roses, and I even found an old label telling us what they are.

Last year the Master Gardeners hosted a pruning class in the Garden. That information came in handy. It takes me a while to make the decisions as to which branches to prune, but the basic idea is to think of the rose as a bowl and clear out anything that points inward. They also say to prune off little branches and anything that is crossing.

Meanwhile, a friend of Jose’s named Victor came up and said he couldn’t help but would love to help the next time I come. He pruned a Rose of Sharon tree and several rose bushes before he left an hour or so later. Working in the Garden is addictive!

On Sunday afternoon I returned and three people dropped by to say hi as I worked.

If you have a business, church, or a non-profit, this is a great way to get out of your own circle of acquaintances and make some new friends. Today I chatted with Jose, prayed with a woman on a motorized scooter, and chatted with a police officer who offered to help during my next workday, which is February 22.

If you live in Woodlake or nearby you might be interested in caring for this garden which has been dubbed a Tulare County Treasure. Let me know if you are interested in adopting a section of the Woodlake Rose Garden and I’ll get you connected.

Or you can just drop by and help me in my Always Write newly adopted section.

Woodlake sits at the foot of the Sierra Nevada Mountains, forty minutes from Sequoia National Park on a slow day, in the fertile foothills. My blogging friend, Russel Ray, inspired me about weeding today. Someone posted a comment, “Don’t use Roundup.” So here’s my question for you. Which do you prefer spraying or digging?

Your opinion – Spray or dig

I’m weird, I love to dig out weeds. Today I put on my knee pads, got my trowel, and had a funeral for a bucket full of crabgrass roots then drove fertilizer spikes into any remaining villains’ hearts around our peach trees. Trust me, someone buried cement under the inch of topsoil. Around here we call it hardpan.

Here are some of our weeds. It’s Super Bloom year. (I didn’t dig these out today. LOL, most of the weeds I dug were crabgrass!) P.S. Porsche, the cat, loves to weed. I have to wear gloves to protect me from his claws. I accidentally stepped on his tail yesterday, so he gave me some space today.

This Saturday our Kiwanis Group will clean out the Woodlake Rose Garden. We weed or trim officially once a month. Weeds love it here. Here is what we had last fall. If you live in or around Woodlake, come join us. The pay –you feel so good when you’re done! High levels of serotonin free of charge.

Now the weeds are green and luscious. You can see that everyone working hard together has paid off, but there are some robust weeds in the background and across the parking lot. So I can’t wait to attack them!

Our dream is to restore the garden to its former beauty.

Hope you all have a happy weekend. If you want to help us on Saturday, drop by the Woodlake Rose Garden between 8 and 11 on Saturday morning – March 23, 2019. 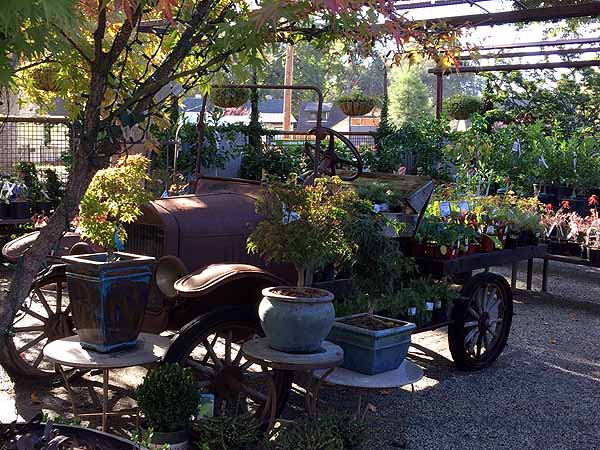 When you visit a new area, do you use Yelp or other applications to find restaurants to visit? Yelp gives the High Hand Conservatory (website link) in Loomis, CA four stars, and TripAdvisor gives it four and a half stars. Traveling and Blogging Near and Far gives it five stars.

To get to the spacious, moderately-priced cafe, you’ll weave your way through a beautiful nursery wonderland. We arrived at a good time, about 8:00 on a Saturday, after the early birds but before the late risers. Timing is everything. The food and service were so fabulous that I forgot to take pictures and enjoyed my meal.  You can check out their menu on The TripAdvisor website.

As much as I love food, the atmosphere made the experience unique. We ate in the covered courtyard, open to the garden vistas and could hardly wait to tour the outdoor and enclosed nurseries as well as the shops housed within the long metal building called a Fruit Shed.

Have you ever bought a grocery-store succulent and two weeks later it turned yellow and the leaves withered and fell off? I’ve done this. Neither spritzing nor ignoring it seemed to halt the dropping leaves. If you enjoy succulents, you could pick out small ones and plant them yourselves at one of the outdoor stations.

You could find more than unique gifts here.  Classes for arts and crafts fill up quickly. We walked into one class, and several participants allowed us to photograph their gourd projects.

For my quilting and knitting friends, one of the stores had plenty of “yard goods,” as my grandma used to call fabric.  Loomis, CA would be a great place to schedule a retreat and come for classes or just to sew together.

If you watch American Pickers, the cost of junkyard cars and parts seems out of range for the average buyer, but nothing draws attention in a professional garden or nursery like a great old car.  The cars in this nursery did not have a  price tag. To complete your home gardens, you could find fun garden art at High Hand. I loved the lasered shovel. Ideas are free.

Hope you’ve enjoyed this brief tour of High Hand. Pictures don’t do it justice. It’s only about a twenty-minute drive north from Sacramento to the small town of Loomis, CA. The two hours my family and I spent at High Hand went too quickly. I’m ready to go back. Want to join me?

If you are interested in having one of these pictures as a puzzle, check out my puzzle website. If you have a picture from your travels you’d like to turn into a puzzle, you can make it yourself or send it to me, and I’ll set it up for you.

Green beens are the worst.  I went out yesterday.  I picked all the beans I saw that were ripe.  I got quite a few, but to look at the plants, there were only little bitty beans.  You think – mistakenly – they’re not ready yet.

What I found out is that you can’t let them be modest.  You’ve just got to pull their leafy clothes away from them.  Mothers that are used to changing diapers are accustomed to that.  They just whip off those clothes, get the job done, and bingo, the kid’s back in business, and Mom is on her way to the next chore.  No pretend modesty, 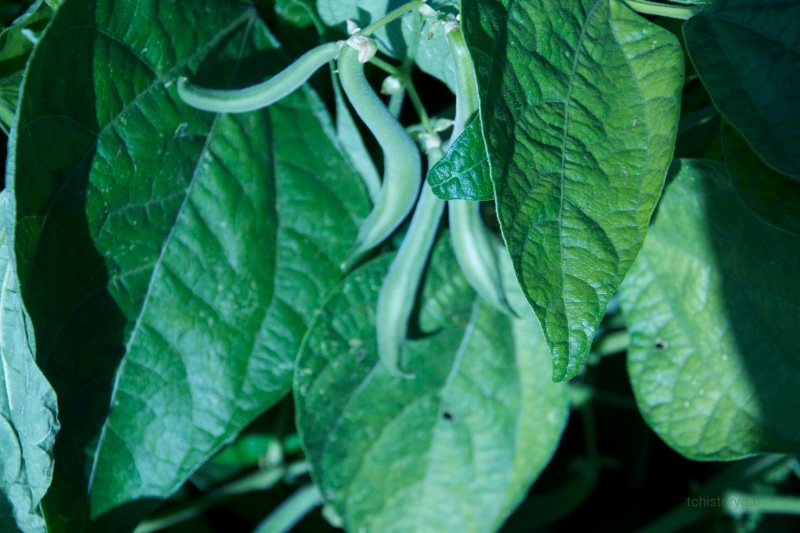 But back to beans.  I guess I was too prissy the first, second and third picking.  After just picking beans two days ago, look what I found – the ones I missed – LAST WEEK!

And look who else wanted my beans!

I kept him from getting some of them as you can see below. 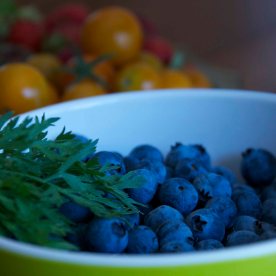 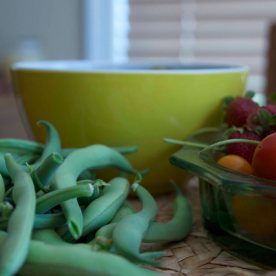 a handfull of beans today 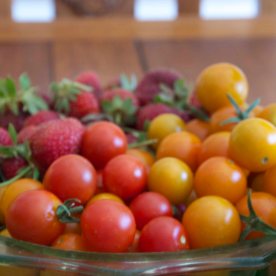 a bevy of berries, etc. 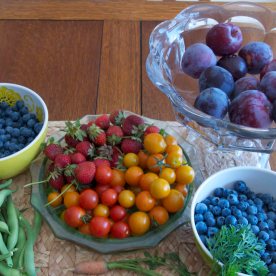 a fruity and veggie collage 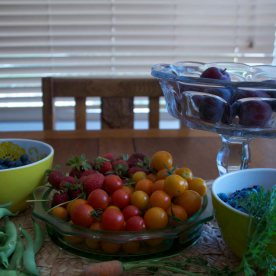 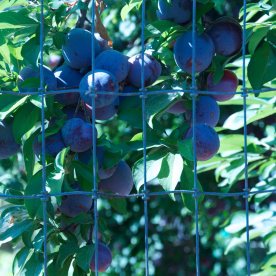 Just over the fence

See you tomorrow.  I got a great question from Benzeknees.  Thanks so much for asking!

My husband, like Manny, hibernates in the winter.  As soon as the days get longer and the temperature gets to about 65, V comes back to life and goes into hyperactive work mode. He also has talent to go with the spurts of energy.

This weekend the sun called to him, and said, “It’s time to think about planting.”  V loves to design landscaped areas, but has never been interested in gardening – UNTIL I retired.  Now he wants to garden.  We live in Central California which is the agricultural capital of the world.  Crops of every type grow here.  You dig a hole, stick something in it, flood it, and POOF it grows.

V is creative and artistic.  Gardening is not merely planting random plants into the soil.  This weekend he came home with lumber, pvc pipe, wire mesh, soil amendments, and germ-free soil.

While he was doing all that I started on another couple of projects.  I pruned roses.  Behind the roses is a once beautiful fence that V designed and built when we moved here 12 years ago.  It has been painted several times, but it never STAYS painted.  (duh) Old fences aren’t interesting to creative people.  Except that they look cottage-ish, and have creative value in the landscape.  To me they look old and run-down.  So I spent the rest of the afternoon scraping the peeling paint off the fence.

Are you the creative one or the grunt in your family?  What are some of your projects?