When Tule Fog hits the Woodlake Valley, the best thing to do is stay home until visibility is better. By ten o’clock this morning the fog had dissipated some, and I wanted to do something fun.  I grabbed my camera and walked around the yard with no intentions, but to have fun in the fog. 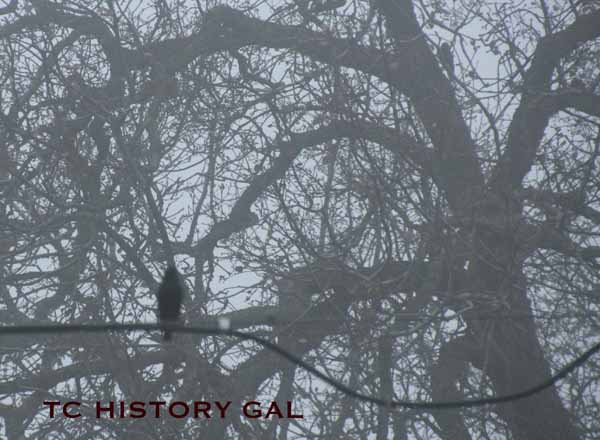 I found this black bird on the spoon handle waiting for the four-and nineteen others to join him to bake in the pie. Little does he know what awaits him. We learned this song in nursery school, and sang it to the next generation.  Do you remember it? I found two tunes. Which did you learn?

Sing a song of sixpence,

A pocket full of rye.

Baked in a pie.

When the pie was opened,
The birds began to sing;
Wasn’t that a dainty dish,
To set before the king?

The king was in his counting house,
Counting out his money;
The queen was in the parlour,
Eating bread and honey.

The maid was in the garden,
Hanging out the clothes,
When down came a blackbird
And pecked off her nose.

They sent for the king’s doctor,
who sewed it on again;
He sewed it on so neatly,
the seam was never seen. 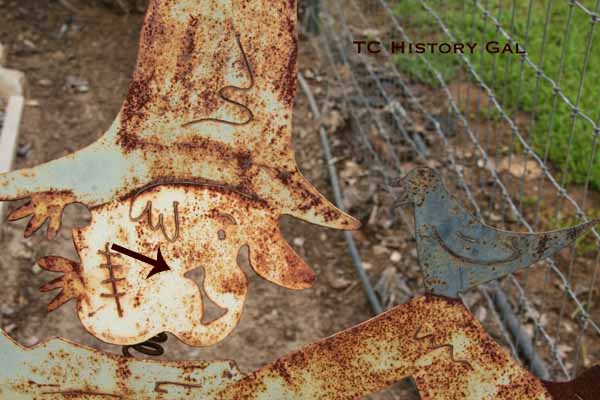 This doggie scarecrow that guards our garden didn’t fare so well with his nose.The birds chewed his ear, too. Invisible seams didn’t happen. Maybe the doctor couldn’t see in the fog, or maybe he, like the brave pup, was a little rusty. Hard to tell.
For a more adult chorus to illustrate these pictures try Leonard Cohen’s “Bird on a Wire.”
Click the icon for more of Cee’s Fun Foto Challenge Entries. 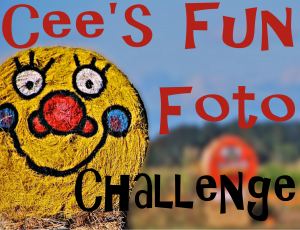 Today I am my own guest bloggers.  I got the idea from Cathy, better known as ShareChair, who reposted some of her earliest posts.  I posted this one year ago, one of my first posts.  Since very few people have ever seen it I thought it was appropriate to republish it to show you another variety of bird we have in Tulare County. 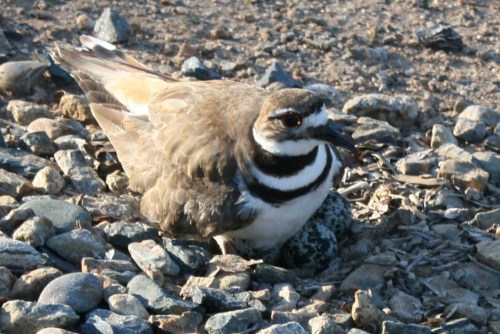 This mama or dad, they look alike, has been sitting in 100 degree heat all day to cool these four future killdeer.  Her choice of nesting site is the reason we question the statistics on their abundance.  Those rocks are our driveway. 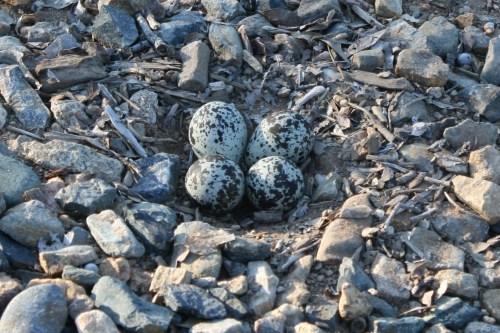 She/he did the Killdeer feigning dance for me until the cat came over to investigate.  I carted the cat safely away, and snapped these pictures one-handed as I left the poor stressed mother/father to get back to work sitting on the now-shaded eggs. 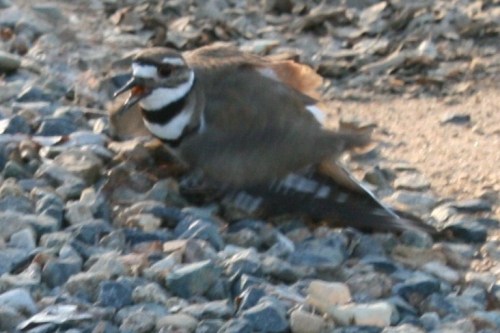 Sorry to say these pretty eggs didn’t make it either, in spite of their mother’s constantly chasing off predators.  Most likely our cats were the culprits as they had their eyes all over those eggs.  Vince and I felt very sad when the nest was empty.

And speaking of eggs did you all get a chance to name the new flamingo chick?  You have until June 3.

I was inspired by a new blogger friend, Bambang (Bams) Triwoko, to create a post for this Word a Week Challenge:  Angle.  I don’t know whether I can put a new angle on it, but I will come at it from my perspective.  Angle makes all the difference in photography.   When I’m just looking at something, I don’t necessarily walk around checking all the angles like I do now when I want to take a photograph.

Last week my husband brought me a present – a bluejay egg that had fallen out of its nest in our trellis.  It felt surprisingly heavy for such a tiny egg.  I decided I should take pictures of it, so I took it outside and began my search for just the right angle.

The first angle I always resort to is whatever hits my eye level without having to climb up onto a rickety ladder or lay down on the ground, or sit in a cow pie.  Then I do the lazy thing, and adjust the zoom lens.

However, there next thing I think of is shooting up at an object, preferably getting an angle with something else interesting in the process.  In this case the little bistro table on our porch made the perfect angles you see in this picture, but it wasn’t particularly interesting as far as the bird was concerned.  Then as I was looking up at the egg from underneath the table, it seemed like the egg moved. 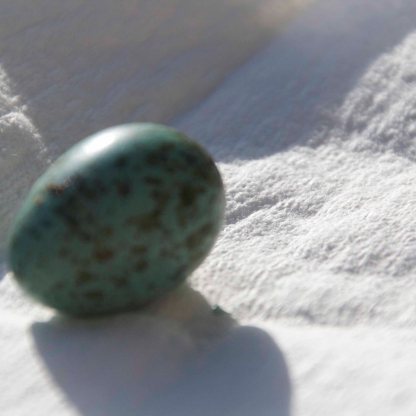 I crouched down so my eye was even with the edge of the table. 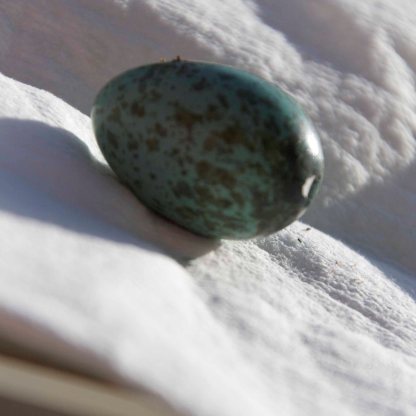 Walking around to another side I spotted the first hole. 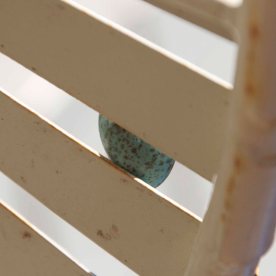 I felt so clever thinking of this shot, but after I shot it, I didn’t think it looked spectacular. 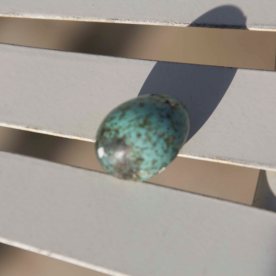 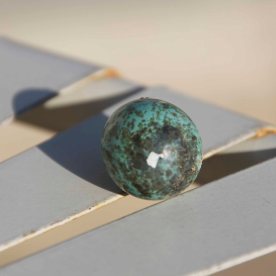 Next, I started walking from one side to another, and in this case I could also manipulate the egg.  When I started doing all that I noticed the holes in the egg that I had not noticed when Vince gave me the egg.  That, along with the rocking motion, made me look at the egg from an entirely new angle.  What if this bird hatched?  What would happen to it?  Would the parents take care of it after I had touched it?  What do baby birds eat?  I moved the potential baby to the bark chips under the trellis.  From this angle you can really see the size of the egg compared to a small bark chip.

With the knowledge that “this egg was alive” angle in mind, I raced to the computer and googled baby blue jays and found out that you can soak cat food and hand feet it to newly hatched blue jays (and other birds).  Someone else fed oatmeal to baby birds.  One comment gave the number for  Southern Calif. wildlife hotline: 866-945-3911.  When I called that number I got three numbers for the Fresno area, and I called the first two and they were off for the weekend.  The third number was a Click and Clack kind of wildlife guy.  He should have his own radio broadcast.  He was so helpful, AND funny.  I laughed out loud as we talked about this poor bird’s possible fates – sorry Autty, some of them were not too positive.  Actually from almost any angle, this baby’s prospects were not good.

What I did learn from Click was that blue jays have no sense of smell.  They aren’t going to ignore their baby bird because I touched it.  Birds won’t know the difference.  His advice to me was to put it back in the nest.  So I did.  Inside the nest was hair, lots of it – probably mine!  It was soft inside the nest.  I felt good about the angle I had taken on blue jay restoration.

I’d just saved a precious life.  Way to go, Marsha!  Chalk up points!  Vince came in the next morning to inform me that he found a broken egg.  I climbed up on my rickety ladder to check the nest – empty.  Bad angle, and I didn’t photograph it.

How to Write a Top Book Review