Today Cindy and I went to the World Ag Expo.  This is THE hugest event I have ever attended, and I’ve been to TONS of exhibitions.  This is an international farm show, and not being a farmer I have never attended, even though I have lived here 28 years.  That is all past tense now.  I joined Kiwanis, and they had a food booth.  So I went to take pictures.

Woe was me when I saw one of the photos that came out like this:

I was just about to throw it out, but I thought, “This is the perfect example of whether Photoshop really works.”  So I kept if and played with it for about a half hour.

This is what happened after I cropped it, adjusted brightness, vibrance, and then painted with a dodge and burn tool.  I was astounded.  It’s still not a great picture, but it IS a picture, and that is what amazed me.  If I coud do that with my little dab of experience on a picture that is so awful, just think what Photoshop CAN do in the hands of an expert – photographer and processor!!!

Any thoughts?  I’ll write about the Farm Show tomorrow.

I have an ongoing need to wait until someone else has posted their response to a challenge before I am ready to take the challenge.  Do I have an ongoing fear of being the first, or am I just blank on ideas.  You’ll never know – because I don’t!!

We have an ongoing need to be concerned for the safety for those entrusted into our care.

We have an ongoing need for vitamin D that comes from a little exposure to the sun.  Manny only sits out for a few minutes so he doesn’t overexpose.  He fades!!!

We have an ongoing need for food.  Snack foods can be healthy, like nuts, fruits and vegetables, but Manny really wants something gooey and sweet.

Sometimes, even the Pope needs to slow down and enjoy life.  There are more flowers than roses to smell.

The need for love is ongoing.  Everybody needs large doses every day!!!

Manny has given his best advice for an ongoing happy life.  What advice do you have to add?

For other ideas about what’s ongoing and what isn’t, check out Jakesprinter’s site.

Ro Social Studies Teachers EVERYWHERE: Do you need a good story to capture the interest of your students before you start your unit on World War I? Do you need something that would wrap it up? Do you want to point them to a great history site? Take the time to read this post about bravery, trickery, and persistence!

There were plenty of hazardous postings during World War I, but serving as bait to lure German U-boats to the surface certainly ranked among the most perilous.

The British navy is believed to have produced between 200 and 300 so-called “Q-ships” during the conflict, vessels specially adapted as decoys and armed with concealed guns. Their goal was to lure enemy submarines to the surface and then attempt to destroy them.

This little-known aspect of the Allied war effort came to the fore last weekend, when researchers announced that they believe they have found the Q-ship HMS Stock Force, sunk in July 1918.

A team of divers spent about four years searching for the Stock Force and discovered the vessel about eight miles from where charts had indicated, at a depth of 200 feet, 14 miles from Plymouth, (England), according to the blog Remembering 1914.

The Stock Force was a former collier which…

My husband and I visited Oman in January when the weather is mild and sunny. On our first day our hosts were keen to show us the best of Muscat and we headed to the main commercial area, Mutrah.

We strolled along the Corniche, admired the Arabic architecture and thrilled at our first glimpse of an Omani dhow. But the best was yet to come, as we made our way from the glaring brightness into the gloom of Mutrah Souq. It was shopping time anytime, and we were in for an amazing sensory experience.

Frankincense pervades the Souq, or open market, with its strong, sweet scent and it can be bought in all sizes of packaging, along with beautiful incense burners. In all directions colour abounds – in fabric stalls, clothing and shoe shops, glassware and jewelry. Decorative wares fill the walkways and this fat bellied brass frog is just asking to be stroked.

The vendors keep up a constant stream of chat to potential customers: “Madam, come in. Madam, what size? Madam, what colour? You try?” The pashminas,  fine cashmere wools used for making shawls, are so tempting, in all the colours of the rainbow, silky, soft and luxurious. There are woven carpets from Pakistan, cushions and beaded shoes from India, silver boxes, rose water sprinklers and Turkish coffee pots delicately engraved and embellished.

On the more quirky and slightly weird side are the embalmed, mounted and framed creatures including butterflies, scorpions, centipedes and frogs. They’re not exactly to my taste but fascinating all the same.

One alleyway is devoted to the jewelers’ shops, which are much more upmarket and way out of our league. The solid gold and silver jewelry is priced according to weight and the current value of gold per ounce. We’re told by one shopkeeper that the local ladies like to wear these necklaces when they go to parties to show off their husbands’ wealth.

It’s best to go to the Souq in the afternoon when the rush of tourists off the cruise ships has gone. Then it’s cool, the light is dim, and you have the time to browse and enjoy with all your senses, and even make a purchase or two.

You can read more from Carol on The Eternal Traveler with her traveling companion, Justin Beaver.

In her riveting book, The Eleventh Question Dianne Gray takes a visionary slant to take care of an invasive social problem that has received much publicity in the last 10 years. The problem of bullying is one of the chief causes of teen suicide as well as incidents of school violence that shock entire communities to their core. 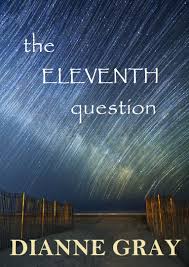 Wikipedia tells casual researchers like me that  “Bullying consists of three basic types of abuse – emotional, verbal, and physical. …Social aggression or indirect bullying is characterized by attempting to socially isolate the victim. …Often bullying takes place in the presence of a large group of relatively uninvolved bystanders. In many cases, it is the bully’s ability to create the illusion that he or she has the support of the majority present that instills the fear of “speaking out” in protestation of the bullying activities being observed by the group.”  http://en.wikipedia.org/wiki/Bullying

This brief excerpt from Wikipedia describes the life of Arista, teen-aged daughter of a loving, but alcoholic and neglectful mother.  With nowhere to turn for help, Arista is on the verge of suicide, when help comes from seemingly out of no where.  What makes this story so fascinating is the OTHER story, of a young ayudante, or helper, to a seer in another part of the world.  Ayudante has his own real world struggles, but is able to “see” Arista as she grapples with her life’s questions.  Her questions somehow tie into his life as well.

The Eleventh Question wove its magical spell around my clock, and time didn’t seem to move at all as engrossed as I was in this novel.

The Eleventh Question and the Common Core Standards for English Language Arts.

It is my trademark to offer an opinion here to how a teacher might ramp up the effectiveness of non-fiction documents by the use of fiction, and vice versa.  The non-fiction, social studies issue here is bullying, and with a hint of religious rights.  I can picture students reading this book and doing what I did, rushing to the find out more about bullying, and then turning it into a social action, project based learning experience.

Project Citizen is one curriculum published by the non-profit organization of Center for Civic Education that helps students reach out to the world of public policies to help them solve major social problems in the local community.  Other organizations such as the Constitutional Rights Foundation, Civic Action Project, and the Buck Institute offer similar effective programs or curricular ideas for whole class participation in a project that drives the learning deep as well as wide.

There are few people in this world who have been untouched by bullying.  It is frightening how subtle bullying can be, and how long-term, sometimes fatal, the effects of intimmidating.  Gray’s solution identified social policies connected with the foster care system that students could evaluate.  She also integrates the spirit world, which captures the imagination in a Harry Potter fashion, as a means of solving the problem.

Conservative Christians will have to keep an open mind as they read this book, just as they do with any book that edifies a religion other than Christianity.   Gray puts the actions of one zealous Christian man on the proverbial red carpet, as his behavior warrants.

As I read this I asked myself, “Is this how people typically view Christians?” and then I continued to question, “Is this an accurate stereotype?”  Then, “Why am I feeling defensive here?”  “Am I responsible for the actions of one man in a story?”  “Does he reflect MY values?”  “What about the imperfections of the Seer, and Ayudante?”   “Were they portrayed as evil or wrong?” One right after another, questions kept tumbling into my brain.  I feared that I might end up with eleven questions.  And then what might happen?

Read the book.  Fall in love with Arista and Cayo, the young Ayudante.  The Eleventh Question is heartening, loving, surprising, and deep.  See if it doesn’t make you think, and smile, and cry a wee bit.

Learn about the philosophy of the eleventh question.  I accidentally found out there is more to this than some random number.  You can always count on Dianne to dig deeper in her writing.  🙂

Other reviews and interviews of author, Dianne Gray, you might enjoy.