Happy New Year!!! Are you celebrating yet or all done?

A few days ago a new blogger asked me for information about blogging.  I remember life as a  neophyte blogger.  Blogging experts wrote in a foreign language, as did photographers.  My blogging friends still help me learn new techniques.

1. Decide the Purpose of Your Blog – Is it for you or for you AND readers?  Remember you can change it later.

That’s enough for today because you need to go post your first post of the new  year.

It is pretty scary to put your work out for the public to read and criticize.  Part of the reason is that, while you want to make changes to make it better, criticisms alert you to the problems, but don’t necessarily tell you how to fix them.

These tips from Structuring Your Novel by K.M. Weiland helped me get out of my rut. (The links are from Amazonsmile, which makes a contribution to your favorite charity if you register for it – Mine is California Council for the Social Studies, of course!)

1.  Open with movement.  She means this literally.  Make the person get up, walk, run, sit – do something.  In my first -345th draft I had started with description.  I thought it was interesting, but then my husband is a realtor.  The rest of the world was not fascinated or captivated, by knob and tube wiring, so this was a huge tip.

2.  Open with conflict. Personally I hate conflict, but then I’m a little boring around the edges, AND I am not the protagonist – of course she has some parts of me, but the boring ones had better go by the wayside!  So she is huffing off in her Mustang convertible after a little tiff with her dad!  OH Yeah, I guess that’s not so different from my life – Dad’s just been gone so long I forgot.  Maybe I’m not boring after all!

Nancy Kress suggested several exercises in Write Great Fiction: Characters, Emotion and Viewpoint that helped me refine my character after I got her moving.

For my own characters I added lines for:

This activity allows you to mix up your characters more easily.  I made one of Vanessa’s conservative Christian friends bi-racial black/white and not white, whose mother was a dancer and singer in New York before she married.  I gave another friend potty mouth – and low-cut casual clothes – totally unlike how I originally pictured either woman.

2.  The final exercise prompted the writer (me or you) to insert body language descriptions between the lines of conflict dialogue.  The main character may be honest or dishonest in his dialogue, but the body language has to be genuine.  First I looked up body language for someone who is irritated on the internet.  Then I rewrote the brief conflict between Sheena and Vanessa and inserted some honest irritation body language.  It didn’t add many words, but I think it added some believability.  It was so easy, I did the same thing for her scuffle with her dad.

So there you have it, my best tips for editing Chapter 1.  Next,  I’ll share Chapter 2 and then in a following post I’ll share  additional tips I’ve learned as I read more.  🙂  For you that are more into photography and non-fiction, thanks for hanging in there while I dabble in fiction.  🙂  Happy holidays!  🙂

Here it is Christmas Eve, and I’ve hardly mentioned Christmas this year or wished you all Happy Holidays.  I hope you all have wonderful plans with friends and family for the holidays.  Our celebration is going to be quiet this year, getting together with neighbors, and being lazy like Mr. Snowman who doesn’t move a muscle while he guards the piano.  He likes his job, though, or hides his feelings behind his broad smile.  I’m not sure which.  He’s not much of a conversationalist!

I want to thank you all of your for your comments yesterday.  They were very helpful.  I agreed with them, and have struggled with Chapter One from the beginning of the first writing of Chapter One, which is soooooo discouraging!

I read today that writers need to wear three hats as they write:  the writer, the editor and the reader.  The last one is the hardest to develop.  The problem is that the writer already knows things that the reader isn’t privileged  to know.  Since I know so much about Vanessa, it’s been hard to weed out just what all I should share in the first chapter.   Some of it I’m not sure I even want to tell you because it’s so hard to put into words!  Another problem I have is that Vanessa keeps morphing.  Sometimes she is so fluid, that I can’t even keep track of who she is!  I thought I knew her pretty well as Trixie, but as Vanessa, she’s not quite the same person.  It’s like changing the person who played Darren in Bewitched in the middle of the series.  He was sort of the same, but not really!

So what you all said to me made a lot of sense.  Making sense of advice, and being able to fix it, though are two different skills!  It’s interesting to me, that teaching and writing  most of my life hasn’t been nearly enough preparation to write a  best-selling fiction novel.  My husband says I’m expecting it to come to easily, and I guess I have to agree with him, although I don’t consider what I’ve done as “coming too easily.”  It’s pretty humbling, really.  But… I will keep plugging along.

Thanks again, enjoy the holidays, and God bless.  🙂

Editing a picture book with 50 -70 word captions for each of 200+ pictures requires more effort than you would think, and grammar is not the hardest part to correct.

1.  Ask experts to read your manuscript.

I might have made the mistake of calling this a cement dam at one time.  But not after writing Images of America:  Woodlake.  Robert Edmiston corrected one entry explaining that cement is a part of concrete, but dams are made of concrete, an aggregate of cement and rocks.  No company in Woodlake makes cement.  In a million years I would not have corrected that mistake on my own.

2.  Ask experts to help you check pictures for historical accuracy.  This can be more difficult than you think.  Sources of pictures don’t always label their pictures.  Even libraries rely on the picture donors to date and label the pictures correctly.  Sometimes you can check facts using newspapers, but they are not always accurate either.  I used two or three references when possible to make sure I had names and dates correct.  Even then, my readers questioned me on several items.  Marcy Miller and I sleuthed through dates of the school buildings.  She had a picture of a building built in 1913, but several dates were attached to it.  I had thought it was the same building that is now the district office, but I had a date of 1923 on that building from an obscure reference in a book.  As we dug, we found that there were actually two different buildings.  We looked at the brickwork at the bottom of the building and compared it to another building picture we had from a newspaper.

3.  Ask experts to check names, double check them. If you are like me, you were not alive in 1860.  When a relative tells you that one family’s children were too young to attend school in 1860, you have to question the historian’s information, if possible.  In this case it was not possible because the historian passed away in 1971, and she did not have anything footnoted.  The mystery might have been solved because the woman from the family in question had children from a previous marriage that could have attended school in 1860.  Even though the children had a different last name than was listed in the book, the historian might not have realized that because the woman had remarried, and the children might have gone by the new husband’s name to make things more simple.  Some things never change!  But it is surprising how important it is even 150 years after the fact, to get the names correct.

4.  Document your sources so that you can find where you got your information.  One fact in question came up about the name of one of the participant in the 1926 Pageant named in the picture. One elderly resident had seen the picture and told Marcy Miller that it was one person,  when in fact it was his brother.  The evidence was in the newspaper, and when I showed her the article, she said, “Well his memory isn’t always perfect.”  Expect people to question your facts, and do your best to keep track of them.  When publishing with  Arcadia books, the template doesn’t allow for footnotes or an extensive bibliography, but you almost need to include one in your own copy.  I spent a lot of time looking for the information source to prove my writing.  Sometimes I had it listed in the caption, but when I approached 70 words in the caption, I couldn’t include the information credit for publication.  As I neared the end of my research, I purchased a product, Wondershare PDF Editor Pro to make my PDFs searchable.  This helped me to find information faster.

In their author’s guidelines the publisher suggested that writers allow 2 weeks for editing using an expert reader.  They moved my deadline up a month, so I didn’t have that luxury, but they have been wonderful about accepting changes, and once I get the proof back, I will have another opportunity to proof read it once again.

I hope this has been a helpful process for you in your own writing.  🙂

Find me on Facebook under TC History Gal Productions.

Yellow seems to creep into every picture even when I don’t focus on it.  I looked for a folder that might show a lot of yellow where one might not expect it.  I first opened “Market Research.”  In this photo trip, I explored what sold books.  Compare the picture with more yellow.  What do you think?

I actually could not find a bookcase with NO yellow.  Yellow makes the other colors pop.  Which book in the next bookcase draws your attention?  Which ones would you choose to read looking at the cover?  What about if you just looked at the spine? 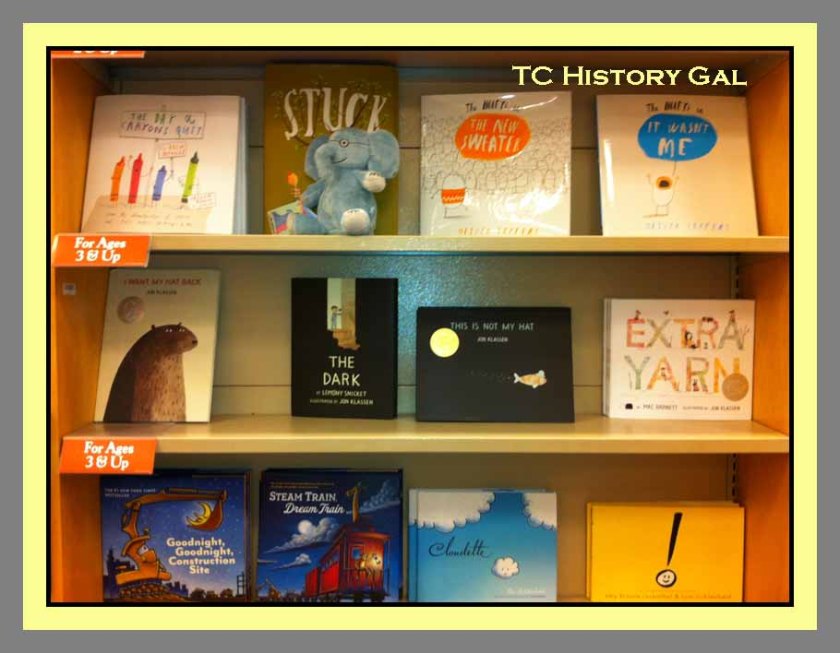 Yellow needs another color to offset it, but a bit of yellow goes a long way, wouldn’t you say?  The book I remember reading from this entire post – 9 months later is The Dark.